We ask a lot from our buildings today. We want them to be sustainable, to keep a certain aesthetic appeal over time, to maintain certain moisture levels, and to be as energy efficient as possible. To quote one of my favorite TV show characters, Barney Stinson, I’d ask, “Have…you met EIFS?”

EIFS, not “E-Fuss” or “I-FS” or even “IFS”, rather “EEFS” stands for Exterior Insulation and Finish System. EIFS came to the United States in 1969, after becoming widely popular in Europe following World War II where it was used initially for retrofits.

Note that there are roughly 7 components to EIFS. Starting with the substrate, water-resistant barrier (WRB), drainage plane, insulation board (most commonly EPS), reinforcing mesh (you can specify different weights of mesh for added durability), a base coat, and a finish coat (in this case the system replicates stucco). 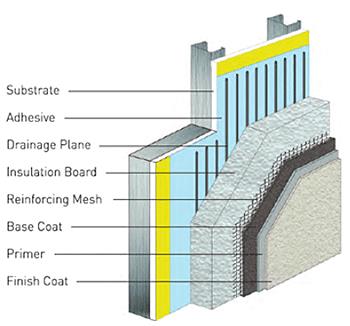 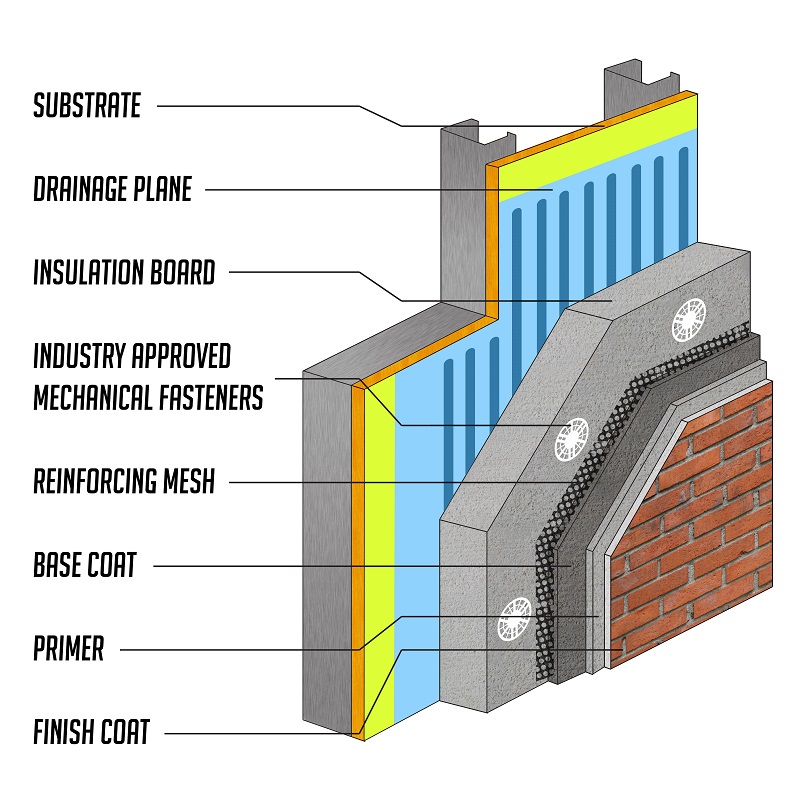 Describing EIFS today is easy and calling it a problem solver is even easier.  Expecting a lot from our building’s performance should be expected, the high performance of EIFS should also be.

When it comes to durability EIFS have proven to withstand the likes of hurricanes and sledgehammers. Recent building renovation projects have even pointed to the durability of EIFS as a reason for its selection.

Senator Maria Cantwell recently said, “We’ve entered the age of energy efficiency”. For the evolution in building sciences I can’t think of many better quotes. Though energy efficiency isn’t everything, it sure is a lot these days. Continuous insulation requirements in ASHRAE 90.1 – 2010 made things easy for many, while challenging others to meet new codes and standards. For those already familiar with the continuous layer of insulation within EIFS these new requirements were easy to fulfill.

Does EIFS have the aesthetic appeal?

There was a time when you could reasonably say “synthetic stucco”, those days have passed. Today, EIFS can visually replicate limestone, brick, and metallic finishes. A variety of colors and additional textures are also available with some of the leading manufacturers.

Research conducted by Oak Ridge National Laboratory tested the thermal and moisture performance of EIFS and brick in all eight United States climate zones, and concluded EIFS with drainage matches or surpasses brick in each test. Phase III of this study followed up on Phase II, Phase II also concluded that EIFS is the “best performing cladding” in relation to thermal and moisture control when compared to brick, stucco, and cementitious fiberboard (commonly known as fiber cement) siding.

You may not know that EIFS currently includes these two features to help address any concerns with moisture intrusion:

The reintroduction of EIFS is full of the basics we all should know. With developments in building science and the introduction of new energy codes and standards, EIFS has provided an answer to any problems architects and designers face today.